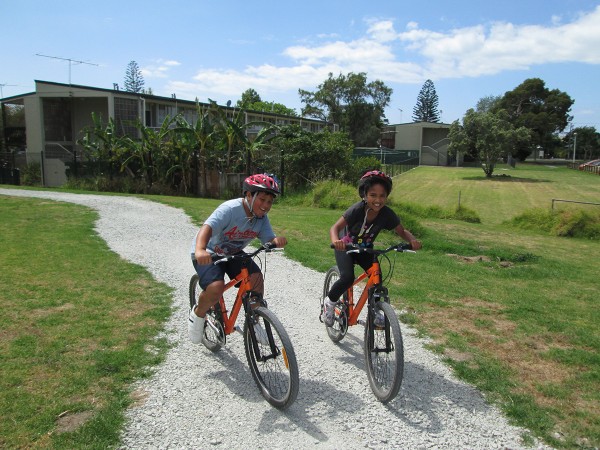 Decile one Onepoto primary students have discovered the thrill of bike jumps and tricks with the donation of bikes and a track at the school.

Over the last 20 years there’s been a dramatic fall in biking by primary school children in New Zealand, but Onepoto students now have bikes and they are riding.

Harbour Sport along with Bike On Trust and Auckland Transport worked to gain funding that enabled the school to purchase a fleet of new bikes, helmets and a storage facility. Funding was also sought to build Te Ara Tika, a track consisting of a 550m loop around the school, an eight challenge skills track and a pump track.

The children learn to ride during class time and can practise at lunch. Initially when the track was built Harbour Sport cycle skills instructors spent time working in the school training the staff and working with the children on the basics of learning to ride.

The school has found that “having regular access to the bikes we can see their co-ordination and fitness grow. The children seem healthier and more alert in class,” says principal Marc Dombroski.

Bike ownership is particularly low among Maori, Pacific children and children living in more deprived communities. As a decile one school with mostly Maori and Pacific children enrolled, the bike track at Onepoto Primary provides a much needed resource for the neighbourhood.

“The community has gotten behind the bike trails too, and we find that children and families come in the weekend to practice moves, learn to ride and hang out,” he says.

Many organisations supported the development of the bike tracks.

Other schools in Auckland have seen the value, and have installed bike and fitness tracks on the school grounds, including